Thirteen miles. Well, by GPS and my pedometer on my watch both show 15 miles. Let’s see if I can explain where we got the extra miles. One good indicator is that the book states, “some potentially muddy tracks”.

During the night, I woke several times to listen to the pouring rain. However, when I awoke in the morning the sun was coming out and there were blue skies. Overall the weather held, with only two rain showers. However, the wet, muddy fields had my boots soaked within the first 30 minutes of our walking day. We left Edenhall, and backtracked a mile into Landwathby to get back onto the route. On our way back into town, I found a geocache I had passed by yesterday. We continued through the town, and across some fields when we came to Briggle Beck. The ground was very boggy leading to the small footbridge, but when we got to the other side, we realized the beck had overflowed its banks and we would have to walk quite some ways through calf deep water. We decided to turn around and head back to Langwathby and follow the road to Little Salkeid instead of attempting the flooded bog area. 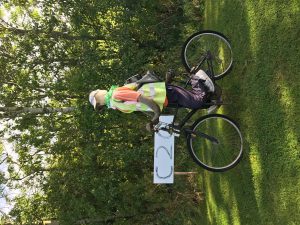 The road that we walked is part of the Coast to Coast Bicycle route, and we passed a scarecrow style bicyclist on his way along the route! Paul stopped to “chat” with him and make sure we were headed in the right direction. I am not sure he got much of an answer. 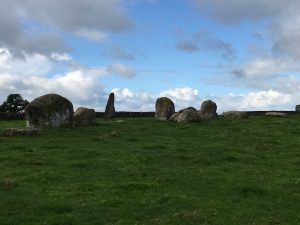 Once we arrived in Little Salkeld, we picked the route up again. There was a decision to make, as the path splits into two different tracks at this point. One travels down to the Eden River, the other track goes higher and is more road and rough tracks. We opted to take the high road, hopefully avoiding flooded or muddy areas along the lower path by the river. Walking along, just outside of Little Salkeld, we passed through Long Meg Stone Circle. Long Meg and Her Daughters Stone Circle, which is also know as Maughanby Circle is a Bronze Age stone circle. It is the sixth largest example known from this part of north0western Europe, whilst the third largest stone circle in England. Long Meg and Her Daughters consist of 51 stones of which 27 remain upright. The largest outlying stone is Long Meg herself, the “mother stone”. Long Meg is marked with examples of megalithic art, which includes a cup and rings of concentric circles. The most famous of legends and local folklore that surround the stones of Long Meg is that there once was a coven of withches who were turned to stone by a wizard from Scotland named Michael Scot. It is said that the witches were celebrating their Sabbath when the wizard ground them at it adn turned them into stone. It is also said that the stones cannot be counted – but, if anyone is able to count them twice and come to the same total, the spell will be broken or it will bring very bad luck. Let’s just say that I didn’t try to count them! I was able to find the Mystery geocache in this area, however!

The tracks that continued beyond Long Meg stone circle were very rough and very muddy. The track passed through a very muddy farm and into the muddy woods. Once we reached some road walking, we decided to continue to follow the road into Kirkoswald instead of crossing more fields. In the town, we passed a garden that had scarecrow type people peeping over a garden wall. Passing out of Kirkoswald, we continued through more wet fields filled with sheep. These fields were rolling hills and quite beautiful. The path went by Staffield Hall, a country retreat resort. It was quite beautiful and I would love to stay here one day and continue to explore the area.

From Staffield, we continued to follow the road the rest of the way into Armathwaite instead of hiking through Combe Wood and further along the River Eden.

After we arrived at our inn, washed the mud off our pants and boots, and had hot showers, Verna and I walked into town to stop at the co-op (convenience store) and to explore around town. We also headed for a geocache at the local church, finding Paul and Marielle looking for the cache as well! It was a quick and easy find, and we also explored inside the church. Leaving the town and crossing the River Eden bridge back to our inn, we found another scarecrow person sitting by the bank of the river. Now, we are back at the inn, getting ready for dinner. Another great day hiking!

The last stretch on the Settle to Carlisle Way. After slogging through mud and bogs for the last seven days, the group just couldn’t take any more. We decided to take the train to Carlisle, and spend the day in town. A day of rest – I think it was needed by all.

We had a bit of a later breakfast, then headed into Armathwaite to explore around town. Although I had done this yesterday, it was nice to be with the group. We went back to the church, then through the town and up to the train station. There is a “switch box” – a small cabin where the switchmen stay to control the switches that tell the trains which track to be o – that is open to the public, but there were closed today. Once the train came, it was a quick 15 minute ride into Carlisle (much different from the 6+hour hike it would have taken!). 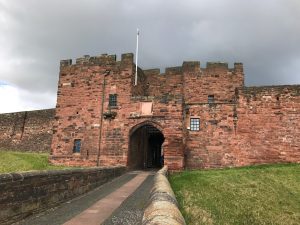 Once in Carlisle, we spent the day playing tourist. Paul and Marielle went off in their own direction. The rest of us (Verna, Shirley, Mom, Dad and I, went to Carlisle Castle where we walked the walls and explored the Keep. This was a military post, so it was smaller and less luxurious than a residential palace castle. It is also one of the best preserved keeps that I have been able to be in. All the floors were intact and we were able to go up to the top floor of the keep! Around the castle there were a couple of geocaches – one we found as a group, and the other Dad and I went to, but had no luck. 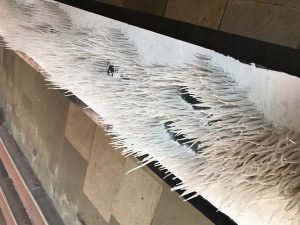 After the castle, we walked to Carlisle Cathedral where we spent another hour exploring inside. There was a local artist who had her artwork set up inside the cathedral. It was a “statue” named Last Steps. The footprints in the design were inspired by a rock in a Glasgow museum that showed footsteps of early people left in the soft muds and volcanic ash. The “grasses” were inspired by the rushes on the Lake District Hills with their spiky tops and seed heads. The rushes flatten over time leaving the shapes of footprints across the moist areas. These grasses were made as abstract figures with their elongated bodies and small heads. Most were made from bone china fired to a very high temperature which gives it strength. The use of the bone china is a reference to the inner form of us all. Some were made from unfired clay which in time can be reduced to dust and used again. There are 8766 abstract figures in the artwork – which is the same as the number of hours in a year – to give us perspective on the time we have on this earth. For me, this was a very thought provoking and inspiring art piece.

As we left the cathedral, I broke off from the group to find a couple of geocaches. I explored a very large town square, find a chocolate shop (where they had free samples) as well as an outdoor shop. I very badly wanted to buy new boots that might not let in as much water, but decided instead to try the waterproof socks they had. As I was finishing up in the store, the group caught up with me. Mom did get another pair of boots, as hers were in much worse shape than mine (I did just get new boots this summer). From there, it was a leisurely 3/4 mile walk to the Inn for the night, where we unpacked and repacked to get ready for tomorrow. Dinner was at a local pub (as usual) and tonight we are going to bed early. Tomorrow will be a slightly earlier start than usual. As I am getting ready for bed, I checked my pedometer – 8.5 miles! Not bad for a rest day!