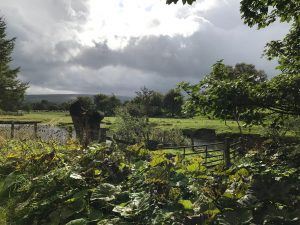 Yesterday, we hiked out of the Yorkshire Dales and into the Cumbria area of England. The countryside is remarkably different. Low rolling hills instead of high climbs. Of course, there is still rain, mud and more mud! Our morning started in a misty rain. We quickly left Kirkby Stephen behind as we began walking along roads, then onto one lane tracks and eventually through the fields. We did walk through several cow pastures this morning – and the cows were very inquisitive about the visitors to their pasture. Talking loudly and making a little bit of noise keep them at a safe distance. At one point today, we passed a field of young heifers – they were so excited about seeing us, they ran to the fence to get a closer look. I reached over and a couple sniffed my hand, one actually licked me, but they wouldn’t move close enough for a scratch or pet.

Passing Sikeside, we walked through a hayfield where the hay had just been harvested and was being put up in the barn in humongous square bales. We stopped for “elevensies” (tea) as the rain continued. As we left there, I started out ahead of the group and was lucky enough to catch sight of a group of pheasant. The hens ran away immediately, but the cock hung back – I suppose to see what I would do. He did stay out of the way and slightly hidden, so he was hard to photograph. We walked passed Ploughlands (a sheep farm) and through Warcop before getting to Blacksyke.

At Blacksyke, we walked through a dairy farm. There were cows and calves in the barns (cows in one barn, calves in the other). The path led directly between the barns and the cows just placidly watched us go by. Once we left the concrete, the mud was slippery, deep and stinky (probably from cow pee and poo). From there, the trail led up a steep wooded hillside and we stopped for lunch at the top. Fortunately, the rain had settled down a bit and in the shelter of the trees, I was able to take my rain jacket off while I ate. 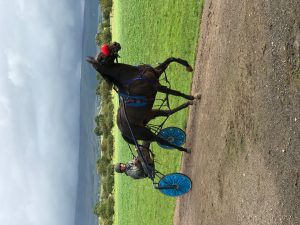 During our walk today, we were lucky enough to pass by a horse farm when one of the horses, a Pacer, was out “practicing”.  He was a champion Pacer who was getting into shape for a race coming up this week.  One of the owners stopped for a bit and talked with us.  He explained the difference between Pacers and Tratters and explained how the leather straps on the legs helped the horse learn a pace gait.  It was all very interesing.

Passing through Little Ormside ad Great Ormside, we stopped for a quick break to find a geocache, backtracked a little when we went off the path (in the wrong direction, of course), eventually meeting back up with the River Eden. We followed the river for a couple of miles. This was the hardest part of the entire day. The river path was very muddy and slippery. We had a very difficulty time walking along it. I fell twice – but was able to catch myself before rolling in the mud. We had to get off the trail and side around in the woods to avoid some of the mud. We did come up on a couple who had (somewhat) hidden themselves in the hollow of a huge tree. They had left their dog “on guard” to warn them when anyone came along. Let’s just say that they need to get a new dog :). Hopefully there wont be a new little one running around in about 9 months! Ah, young love. The trail eventually got a little bit better and less muddy, just as we got to Appleby-in-Westmorland. We had a little over a mile to walk through town to get to our hotel for the night. All of us had wet boots by the end of the day.

Tonight will be dinner at the Royal Oak – about a 15 minute walk from our hotel. But when you have walked 13 miles in a day, what’s a couple more