Back in Sedona for a couple of days, we had time to get in a couple more hikes. Today, we wanted something a little bit on the lighter side since most of us had sore legs from the canyon. We decided that Boynton Canyon would be about right. It was listed as being a moderately easy hike in the books – 3 miles each way – with just a small steep section at the end of the trial. 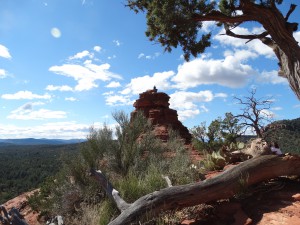 Right at the beginning of the trail, there is the Vista Trail that climbs to the Boynton Canyon Spire which is another Vortex area in Sedona. No one in the group felt anything from the Vortex, but this part of our hike was made special by the music. While we were still in the parking lot, we met a gentleman, Robert, who was handing out “Hearts from Mother Earth”. He collected small red rocks from the area, and carved them into heart to give out to people he meets. He explained that he is trying to pass along peace and love one heart at a time. I spoke to him for a little bit. He said he moved to this area when he was 55 so that he could afford to live and “be a kid” for the rest of his life. He must have left the parking lot ahead of us, because, as we came to the end of the Vista trail between the spires, he had climbed to the top of one and was playing an Indian Flute, serenading those on the trail. It made our time there very special. 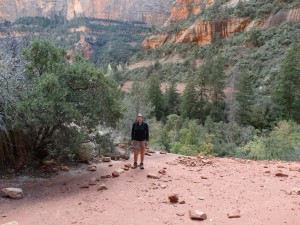 Once we backtracked along the Vista trail, and picked up the Boynton Canyon trail again, we followed it past the Enchanted Resort. It looked very beautiful, but was a gated community and there were plenty of signs telling hikers that it was a private area! The trail followed the Canyon wall along the resort for about a mile before we finally left that behind. From there, the trail became fairly flat (with a slight uphill grade) and sandy. It was lined on both sides with thick Manzanita bushes (one of my favorite desert plants). The path then winds itself into a deciduous forest where the fall colors come out. As the canyon narrows, you begin the steeper parts of the climb up rocky paths. The final push is a steep section of red rock where you will find the “End of Trail” sign, and a huge rock shelf to sit and eat lunch while looking out over the box canyon you just journeyed up.

The hike back to the parking area doesn’t seem to take as long (mostly because it is downhill). Stop once in a while to enjoy the views! As we came back to the spires, we could see a large group of people and hear some drums. As our legs were tired, we didn’t climb back up the Vista trail to see what was going on. Instead, headed back to our vehicle to head back to the hotel (and hot tub)!