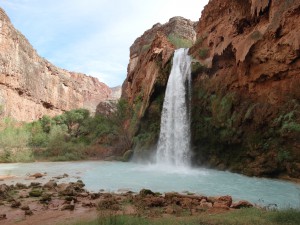 Wednesday: Since we would be hiking out of the canyon tomorrow, today would be a rest day – but we would still be hiking! We started by heading back to Havasu Falls, to see it in the morning light. Havasu Falls is one of the most famous and most visited of the various falls along Havasu Creek. It is a 90-100 foot fall. The configuration of the falls are ever-changing due to the high mineral concentration in the water that creates the travertine, and due to the large floods that -wash through the area. It is about 1.5 miles down stream from Supai, the capital of the Havasupai Indian Reservation. Supai is the only place in the United States where mail is still carried out by mules. Supai is also the most remote community in the lower 48 states (according to the US Dept of Agriculture).

The Havasupai people are an American Indian tribe who have lived in the Grand Canyon for at least the past 800 years. Havasu means “blue-green water” and pai “people”. During the westward expansion and later the development of the National Parks, the Havasupai lost much of their tribal land. In the 1970s, the petitioned the US Judicial System and were able to regain some of it. Today, tourism along Havasu Creek is the main work for many of the tribal members. 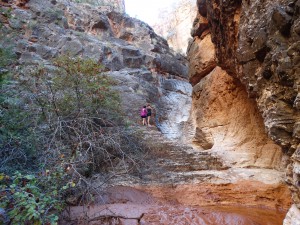 We crossed the creek at the base of the falls and headed up Carbonate Canyon. This canyon has one of the largest mines in the area where rails and timbers can still be found descending 3 levels. Due to the instability of the mine, it is current roped off and tourists are not allowed to enter. Lead was last mined here during WWII. The veins of lead follow the veins of quartz, and yellow ochre can be found here as well. We were able to see the entrance of the mine and found one of the ventilation shafts that still exist. Throughout the canyon we found many types of rock – coral, lead, quarts, chert (jasper), etc, as well as many fossils. We even found a huge bee hive snuggled into a rock crevasse on the side of the canyon walls. Plant life abounded with cottonwood trees, cacti, mesquite, cats claw acacia, bear grass and western red-buds (other wise known as the Judas Tree). Canyon wrens sang to us along our way, we even found a few butterflies and grasshoppers, a tarantula wasp, and the footprints of Arizona Ringtail Cats. As the canyon neared its end, it became narrower and rockier. We came to a point where we could walk no further without climbing the cliff walls. While most of the group stopped, Dakshina and I went just a little bit further, scaling a portion of the wall to see just around the next corner. We backtracked along the canyon, coming back to Havasu Falls just in time for lunch. 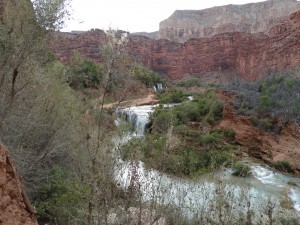 We continued our hike up to 50 Foot Falls where Dakshina, Verna and myself went swimming. We waded over the closest side of the falls where the water fell over us, giving us a very cold back massage. Then we swam over to the middle of the falls, walking the last bit on the travertine. The idea was to dive through the falls and end up in a cave behind the falls. Unfortunately, the water was a bit strong (and yes, I chickened out – I was afraid to dive where I couldn’t see) and we skipped the cave. We ventured our way over to the far side of the falls where there was a little grotto with a side fall. Then we swam our way back across the pool to continue our hike. 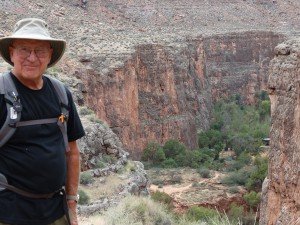 It was time to head back to the campsite. On our way down, some of us took a side trip above Havasu Falls. We came to a point along the trail where we could look down Carbonate Canyon, passed Havasu Falls and look down into our campground. Beautiful. Dakshina continued to show us the surrounding geology (the eons of history in the rocks of the canyon – including the “time-gap” missing from some of the layers) and plants. Once we had our fill of the view, we backtracked again to the main trail and made it back to camp just in time for dinner. Again, as the sun set early in the evening, everyone was quite ready for bed.

Thursday: Our day began before the sun was up. We were wakened by our guides at 415 to begin breaking camp. We were on the trail by 520. Since it was still dark, we used headlamps to guide our way. As the moon was full, I found it easier to turn my headlamp off. With it off, I was able to see the trail and where it was going. With the headlamp on, I was only able to make out what was right in front of me. In the dark, the first two uphill miles to Supai went fairly quickly. Once we walked through the village, our next 1-1.5 miles was fairly flat until we made it to the Hualapai Canyon. Then we walked uphill along the wash in the loose gravel and over stones. The miles went fairly quickly and the weather was cool. When we stopped, we could see the dark cloud and rain moving in from down canyon. The 2 miles was the steepest part. In some sense, the path was a bit easier to walk on without the loose gravel, but then you had to contend with the steepness. By the time we reached this area, the mule teams were starting to pass us with baggage and mail. At least getting out of their way gave us a breather from the hike! The rains began to move in during the last 1/4 mile of the hike – our guides had timed things perfectly! When we reached the top, our luggage had not yet arrived so we sat in the van and had lunch while we waited. Once the luggage made it to the top and was loaded, we started the 3 hour drive back to the hotel in Flagstaff to pick up the car, and then another hour back to Camp Verde. We arrived back at the Comfort Inn around 4 in the afternoon – just enough time to sit in the hot tub for an hour before getting ready for dinner! A long, but very accomplished day!

2 thoughts on “Carbonate Canyon, Little Navajo Falls, 50 Foot Falls and the Way Out”