Tuesday morning the sun met up by 630am.  Our guides had already started breakfast:  eggs, bacon and hash browns.  As soon as breakfast was over, we headed out for a 7-8 miles hike.  When our guides told us that it would take all day, I couldn’t believe that – but I should have.  Today was one of the most fun, but most challenging hikes I have ever done.  Not much could have prepared me for this hike. 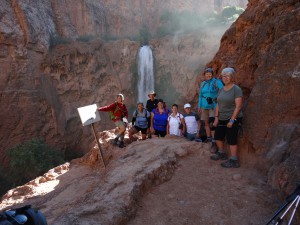 We hiked through the rest of the campground.  The campground itself is along the banks of the Havasu River and stretches about a mile.  During peak season, there could be as many as 500 campers here!  Just down river of the campground, is Mooney Falls.  The Falls are named after a miner (Mooney) fell to his death trying to descend the falls in 1882.  The rest of his party were unable to recover the body, but several days later, Mooney’s boots were seen on an Indian boy.  Almost a year later, the miners then asked the Indian youth how he was able to get down the falls and the miners were shown a small cave that led to an overhang.  The miners then made the cave larger and blasted out a slanting tunnel, and added iron spikes in the cliff wall below to reach the bottom.  It is along this “path” that we also descended the falls.  Of course, before we descended, we had to stop for a virtual geocache!  We did have the assistance of chains to hold onto and wooden ladders nearer to the bottom.  Even so, it was quite daunting!  Once at the bottom, and when our legs stopped shaking, we took some pictures of the falls and continued downstream.

Our journey downstream was adventurous.   It included several creek crossings.  Each time we crossed a creek, we took off our hiking boots and put on our water shoes.  Once across, we would put our boots back on.  There was only a couple of times that the creek crossings would be close enough, or the terrain even enough to leave our water shoes back on.  We hiked through a “garden” area where the canyon was filled with grapevines.  Although we were a little bit past prime season, our guide was able to find some small grapes that the animals had left for us to try.  Although this part of the hike was mostly down hill, there were several places where we had to do a little bit of rock climbing, and even one place where we had to walk across a deep gully on a board.  The canyon walls rose on either side of us.  We watched for Big Horn Sheep, and although we saw lots of evidence of them along the trail (poo, and we could smell the male musk marking), we never caught a glimpse of one.  They are supposed to be quite good at hiding among the rock.  We did see rock squirrels and canyon wrens along our way. 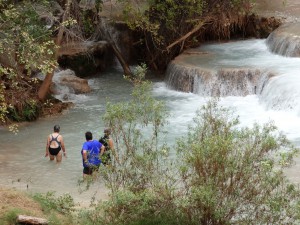 As we came closer to Beaver Falls, our guide told us that we would make a loop around the falls.  So, we continued downstream, climbing ladders and approaching the falls from above.  We found a lone picnic table that overlooked the falls.  (These picnic tables are often in the oddest spots – giving people a chance to sit and rest along the trail.)  While some of the group remained up at the picnic table, Dad, Verna, Gloria and I climbed more ladders down to the falls for a quick swim.  Then we went back up the ladders to join the group for lunch.  After lunch, we headed back down the ladders – we had to cross the falls to the other side!  The water was at least waist deep as we crossed, but the current not too bad.  The far wall of the canyon came right down to the river and once we crossed, we had to scale up the wall with just toe holds for a short distance.  Some (much thanked) person had strung a rope along this wall to give us something to hold onto!  Once on the other side, on firmer ground, we had some more ladders to climb and rocks to scramble up before getting back to a place where we could once again cross the river and continue our way up the trail.

As we came closer to Mooney Falls, our guides led us on a side trail that led us to a “Secret Grotto” where there was another waterfall called “Shower Falls” or “Bath Falls” – thus named because there was less calcium carbonate in the water and not so drying to your hair and skin.  The area also had a little cave, or overhang that was covered in moss and ferns – very pretty.  We waded up the river a bit from here and were faced once again with Mooney Falls. 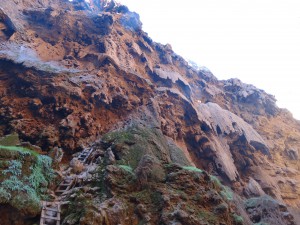 At this point, I had to face the fact that the cliff wall that I scaled down, I now had to go up.  Hiking shoes back on, backpack cinched firmly to my back and up we started.  I have to say that it was much harder to go up (which is not unusual for me).  There were several times that I didn’t know where to put my feet.  As much as I wanted to stay plastered to the wall, there were times that you had to lean out a little bit to be able to grab a chain and haul yourself up.  The weight of my backpack made me feel that it want to pull me out and down.  I was very happy to see the slanted tunnel – at least I had rock around me if I slipped and fell!  In the end, we all made it up without slips or injuries.  I have to admit I was quite proud of myself!

From here, as we said goodbye to Mooney Falls and made our way back to camp, I reflected that I was glad that my fate was not the same as Mr Mooney’s.  After all, since it took a year to get to him, his body had been encased in travertine.  The story say that the miners had dug him out and buried him near the bottom of the falls.  Later, a flood came and uncovered him and a Havasupai Elder found him and reburied him on an unknown ledge on the west side of the falls.