Today was one of the toughest hikes I have ever walked.  I think there is little to compare from my area of Virginia.  I have been on hikes that were 5+ miles uphill before turning around to come down.  None of them were as rugged or as steep as this one was.

We started at the northern parking lot near Encinoso Picnic Site.  The trail began going uphill within 2-3 steps of the trail head.  Just at the beginning of the trail, you could see Wilson Mountain looming in front of you.  Just the sight of how high we would be walking was daunting.  Seeing the steepness of the mountain didn’t make me feel any better.  We quickly began hiking up the draw.  The colors of the leaves were just starting to turn.  There were spots of reds and yellows.  Many of the leaves were already on the ground.  This part of the hike was moderately steep with some loose rocks.  As we reached the end of the draw, Wilson Mountain loomed ahead and another sheer cliff face to the right.  This is where the strenuous part of the hiking comes in.  The next mile up is steep and rugged.  The trail is very narrow, with a steep drop off on one side and a steep mountain face on the other side.  There are multiple switchbacks.  The footing is not easy with loose rocks and high steps, especially as you get nearer to the top..  However, there is plenty of opportunity to stop and catch your breath while you marvel at the view.  Every step higher, the view just becomes more impressive.

When you reach the top, turn left off the trail and head for the large rocks to sit and have a breather.  From here, you can see where you have come from – the parking lot will be behind the knoll to your left and Sedona will be to your right.  You can see the Midgley Bridge that you would have crossed if you drove from Sedona.  From here, there is more uphill from here, but not as steep as what you just finished.  This will work its way up to a flat area that goes across the plateau.  The footing here was quite muddy, probably from the recent rains.

We continued to follow this path until we came to the sign that pointed us right to continue up the North Wilson trail.  (This is the First Bench of Wilson Mountain).  However, before we turned, we continued straight on a short path (not of the map) for about 15-20 feet.  Once we came to the top of the rise, there was a stunning vista of Sedona in front of us.  A quick stop for pictures and we returned to the trail.  For the next mile, we continued uphill, again walking switchbacks that were still steep, but not as bad as before.  When the switchbacks were finished, we walked through a bit of Pine forest before coming to the end of North Wilson trail.  There was a very large tree that had fallen here – big enough for all of us to sit on to eat our lunch.

After lunch we followed the Wilson Canyon Overlook Trail around the Peak of Wilson Mountain, then through another stretch of pine forest.  This hike was quite pleasant with just a few gentle ups and downs.  It continued out of the pine forest to another plateau area where the evidence of Brins Mesa fire (2006) still shows.  Many of the trees that had burned and died are now lying on the ground, and it quickly became a bit of an obstacle course stepping over them.  This trail is also very narrow, and is quite overgrown.  Many of the desert plants are quite prickly and there were some areas where the trail was overgrown with thistle.  Long pants, although not a must, would certainly help protect your legs.  (You might even opt for long sleeves as well as some of the bushes are tall enough to catch your arms).  For some time, it seemed as if there was very little to see and some of the group began to wonder if they should turn back.  However, we pushed on and were mightily rewarded with the views of Wilson Canyon.  There are not words enough to describe the beauty and majesty of this overlook.  If you make it all the way to the top of  Wilson Mountain, you do not want to skip the extra mile or two to this overlook. 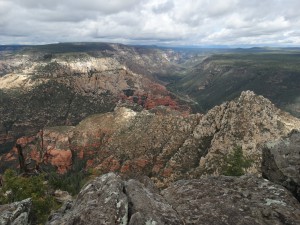 After sitting and just taking in the views, we turned back and made our way to our lunch spot.  Some of our group continued down the trail, and the rest of us continued on to the Sedona Overlook which was .4 miles away.  Again, the beauty is breathtaking.  After a few more pictures, we began our journey down to the parking lot.  From the top to the First Bench wasn’t too bad.  The ground is rocky, so you do have to watch where you put your feet to keep from rolling an ankle.  Back across the plateau, where the mud had actually dried a bit since this morning.  We began the steeper down hill portion, stopping just briefly at the rocks that we took our first rest at.  From there, the trip downhill was very steep through the switchbacks.  The rocks are very loose – almost like ball-bearings under you feet.  It is very easy to slip and fall.  Take your time and be careful where you place your feet.  I definitely would not want to walk down this trail if it were wet.  Getting to the bottom of the hillside and entering the draw meant that we were near the car.  By this point, my legs were starting to feel a bit weak and wobbly, but you couldn’t stop paying attention to where you were walking as it was still quite rocky.

Once at the bottom, I had to reflect on this hike.  Two years ago, I don’t think I would have made it to the top – I know I wouldn’t have.  Last year, I might have made it, but it would have taken me much longer, and I likely would have given up.  After many miles, and lots of hard work, I was able to push myself sufficiently to not only make it to the top, but to enjoy the overall hike.  (I do admit to a couple of weak moments on the steeper trails, asking myself why I am doing this.)  The view at the top of Wilsons Canyon overlook was all the reward I needed.  I think that if I had been on this hike on my own, I would have stopped here and just sat for a long time.