Morning came once again on the early side.  We were all down to breakfast by 650am.  It looked like the weather was going to hold for most of the day – thunderstorms were being called for in the late afternoon.  We decided to head out to Soldiers Pass.

It was a 30 minute drive from our hotel to the trail head.  Although a bit chilly in the morning, we quickly warmed up with hiking, and the day continued to warm as the sun came out.

From the trailhead, it was about .2 miles to Devil’s kitchen, a huge sinkhole – the largest in the area. It is 100 feet deep and still active.  The sinkhole developed in 1880 when a cave collapsed.  After the collapse, red puffs of dirt continued to rise from the hole for some time.  The locals began to call it the Devils Kitchen.

About another half mile up the Soldier’s Pass Trail, we came to the Seven Sacred Pools.  This is a formation of 7 pools of water alone a water run off that never dry up.  The fourth pool is the deepest at 4 feet deep.

From this point, the trail continues approximately another mile, getting steeper as you near the end.  Watch to your right – don’t miss the Soldeier’s Pass Arches! Continue the climb – the view from the top of the trail makes the hike worth it.  You get an amazing visita of the valley looking down into Sedona.  Once we reached the end of Soldiers Pass Trail, we turned right 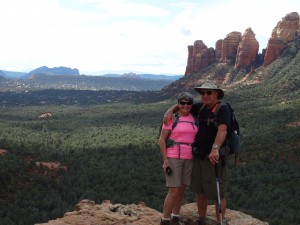 onto Brins Mesa Trail.  Just a short distance from Soldiers Pass, the trail make a Y – go to the right and follow it to the end – a great place to sit and eat a snack while enjoying the view – and don’t forget some pictures. We backtracked to pick up the Brins Mesa trail again, following the trail down hill.  As we came to a flatter area (the mesa), we again detoured to the right to climb a large rock formation – quite an easy climb to the top to again get some more pictures.

This area had many burned and dead trees left from he Brins Mesa fire in 2006.  After our detour, we continued down the trail into the Morman Valley.  One time, we went off the trail and followed the rock around a rock formation.  Once we realized we had no where else to go, we backtracked and realized that there were clear signs  that the trail didn’t go that way – we just overlooked them.  As we traveled down this trail, the scenery was ever changing and awe inspiring.  To our right, the end of the butte became a face of an old man with a beard, watching over the valley day and night.  To the left, there was a rock formation that looked like three choir members singing praises down the valley.

Reaching the bottom of Brins Mesa, at the trail head, we stopped for lunch and a bathroom break before picking up Jordan Trail to begin heading back to our vehicle.  About 1/2 way along Jordan trail, we detoured to hike the Ant Hill Loop – about .3 miles around and just fun to do.  The Jordan trail led back to the Devil’s Kitchen sinkhole.  We continued along Soldiers Pass again for approx .05 miles and took a right on a jeep trail to meet up with Teacup Path that climbs in front of Coffeepot Rock.  We didn’t finish this whole trail as the winds were rising and it looked like rain was in the forecast.  We headed back to the car, and back to the hotel.

Of course, no hike is totally complete without an after hike snack, so we stopped at Baskin Robbins for a scoop of ice cream.  Once back at the hotel, I decided to head for the outdoor hot tub to soak my muscles. A hot shower, a quick change and we were off to dinner at the Steakhouse in Camp Verde.

Once again, the day has come to a close fairly early.  It is only 830 and I am ready for bed!